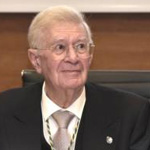 – In November 2019, Mr. Antonio Colino was elected as RAI President.
– In December 2019, the members of Governing Board were elected. Among them as vice presidents; Dr. María Vallet Regí, Dr. José Manuel Sanjurjo and Mr. Luis Lada Díaz and Dr. Eloy Álvarez Pelegry as Secretary General.

– To promote quality and competence in Spanish engineering, fostering study, research and progress in those sciences on which it is based, in the techniques required by its applications and in the methods that encompass its creative activity.
– To collaborate with other Academies and similarly-oriented institutions, whether located in Spain or other countries, as well as with those of an international nature, on matters and programs of common interest.

The Royal Academy of Engineering of Spain organised several sessions and seminars, and other events during 2019, highlights including::
– Opening session of the Royal Academies of the Institute of Spain with the lecture “5G in perspective”, under the presidency of HM the King Felipe VI, at the RAI headquarters.
– Reception ceremony of five new members as Academics.
– Annual awards “Academiae Dilecta” and “Young Engineers”.
– “Engineers Laureados” awards.
– Homage to the Mining and Industrial Engineering School and the Almadén Mines. In collaboration with other academies.
– A representative of the RAI participated in the Euro-CASE – Energy Platform. The report “Energy Transitions in Europe common goals but different paths”, has been published.
– Participation of RAI representative in the Euro-CASE & CAE Forum on Evidence-Based Scientific Policy Advice held on 15-17 April 2019 in Ma’anshan, Anhui, China.
– Volumes VIII and IX of the collection “Technique and Engineering in Spain”, and report of the “Energy Observatory”.